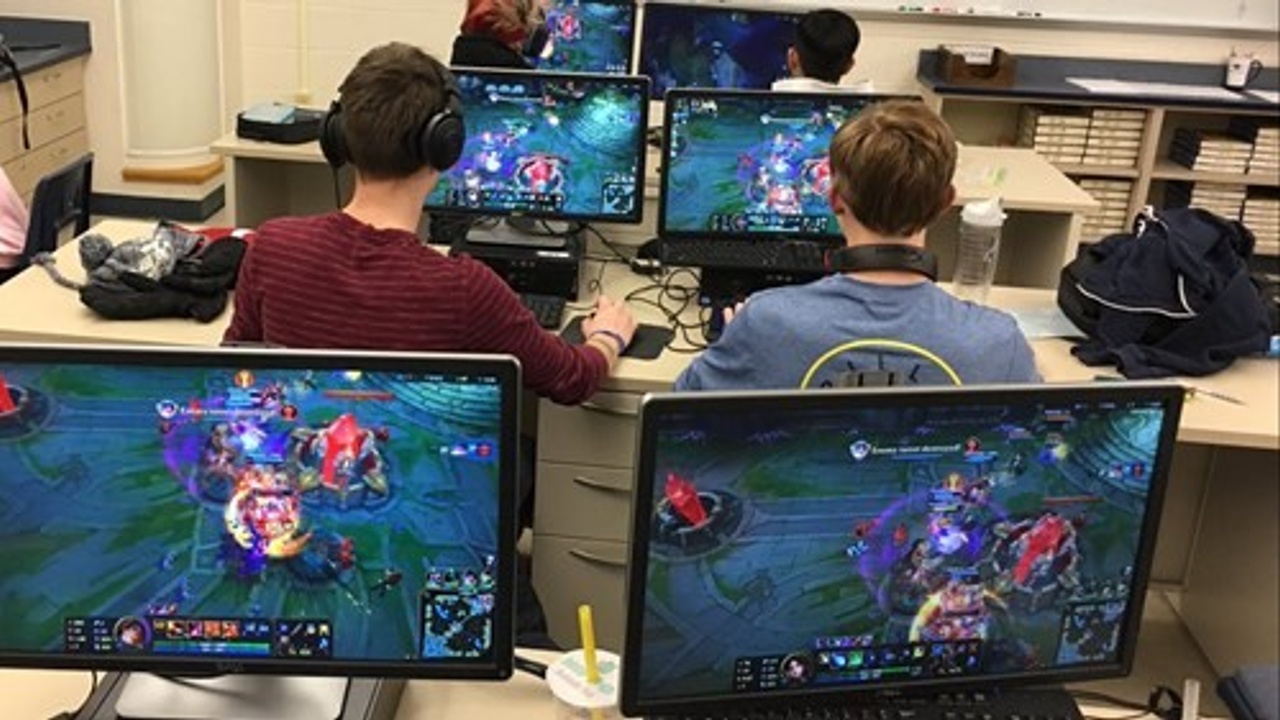 The timing couldn’t have been better. High school juniors George, Fletcher and a few other students had thought about creating their own esports club, and were told about some good news… One of their administrators had just attended a meeting of The Emerald Foundation, and were introduced to NASEF. They loved the idea of forming an officially-sanctioned esports club under the NASEF model. Manheim Township’s High School Esports Club was official!

Recently, we met with George V., the Vice President of the Manheim Township High School Esports Club to learn about his experience within a NASEF club.

What do you enjoy most about competing in your esports club?

It’s a competitive environment, which makes it a lot of fun. When we play on our own it’s one thing, but when we work as a team it’s a lot more competitive. As a team, we work to achieve one common objective and try to be the best that we can be.

Have you met new people by having an esports club on campus?

You definitely get to meet new people when you form an esports club. Since it was our first year, we didn’t know how many people would show up since it wasn’t heavily advertised. A lot of people who joined the club at first were people that I already knew.

Once we activated the club and began promoting it on the daily announcements, people started showing up! It was here that I met people that I had not seen before. Our club has 10 to 15 people that come on a regular basis.

The only way to meet most other students is if I had a class with them, so having an esports club on campus was a great facilitator to meet people I otherwise wouldn’t have. It also allowed me to get to know people better.

Do you spend time with the members of your esports club after competition?

Playing in an esports club, you know everyone there is interested in and enjoys playing video games. It’s easier to be more open with people when you have some sort of common ground.  After the season ended, we found that we kept playing outside of the club, still get on Discord to talk to each other, and we still hang out pretty often.

How did you do your first season of competition?

To be frank, we weren’t very good, but that happens... Forming our club was pretty last-minute for all of us, and only a few of us had played League of Legends beforehand. Most of us had just begun playing it. It’s not a simple game to learn, so there’s definitely a learning curve. Fletcher and I worked to try to teach our teammates the game, but our competition was really good. We had some tough games, but had a lot of fun doing it!

I still consider the season to have been a success for us, even though we didn’t win a lot. I am really proud of the way everyone communicated with each other, and people didn’t get angry or frustrated if we started falling behind. It’s great to see people being good teammates and being a part of a good team environment.

I also enjoyed seeing the newer players grow from the first day to our last day of competition. That was really great to see.

I think a great teammate is someone who won’t get toxic or angry and who is not afraid to give you constructive criticism. To be a great teammate, you should want to improve, and know that you’re not the best at everything. We all should recognize that each of us has things that we can do to improve.

You also mentioned someone who “won’t get toxic,” which is something that’s great to think about. How does your club protect against toxic behavior?

The general attitude is that we’d tell the person to stop negative behavior. It’s the responsibility of the players to keep each other in check if they hear something that’s inappropriate.

What do you see as some of your goals in having a club on campus?

We want to help get esports more widely accepted in schools and make it more mainstream. It’s not just kids playing video games. There’s a lot more that happens!

There are a lot of people that still don’t understand the benefits of high school esports. What are some of the major skills you’ve been able to grow as a result of your involvement with your esports club?

Teamwork has been a big one. League of Legends is a team-oriented game, so it’s important to be able to have great communication skills. You have to be able to communicate precisely with your teammates to make a play happen well or to win a match.

We’ve had to learn to improve cooperation because even when you may disagree with someone on how a play went, you want to be able to work through if you have differing opinions. Esports teaches you to compromise with your teammates so that arguing doesn’t take over and to avoid creating a bad environment. If you can’t compromise, you can’t win as a team.

What would you say to those students who have an interest in esports but aren’t gamers?

We’ve had students join us who like games and wanted to be in that type of environment. There are a ton of roles available for students in clubs to take on, whether it’s a managerial role, keeping track of information, helping with communications, treasurer, or practice management. An esports club isn’t just a place for gamers.

What would you suggest to schools who might be on the fence about bringing an esports club onto their campus?

I’d say, just do what our school did. Give it a try for a season or however long you can, and just see how it works.

Our school handled esports just like a traditional sport. They helped get us the support we needed to get it off the ground, and it’s been a ton of fun to be involved with seeing the program grow!

This has been great; thank you for your time! Do you have any plans yet for life after high school?

I’d like to go to an in-state school and may major in computer science. I think I want to stay in something STEM-related. If I choose a different field, it could be something where writing is involved.

Being a part of the competition as a professional gamer sounds like it’d be pretty enjoyable, but that’s a tough route to go. I’d like to be in the field of video games. It’s a broad field, but I think it’d be pretty cool to work for a company within the gaming industry.