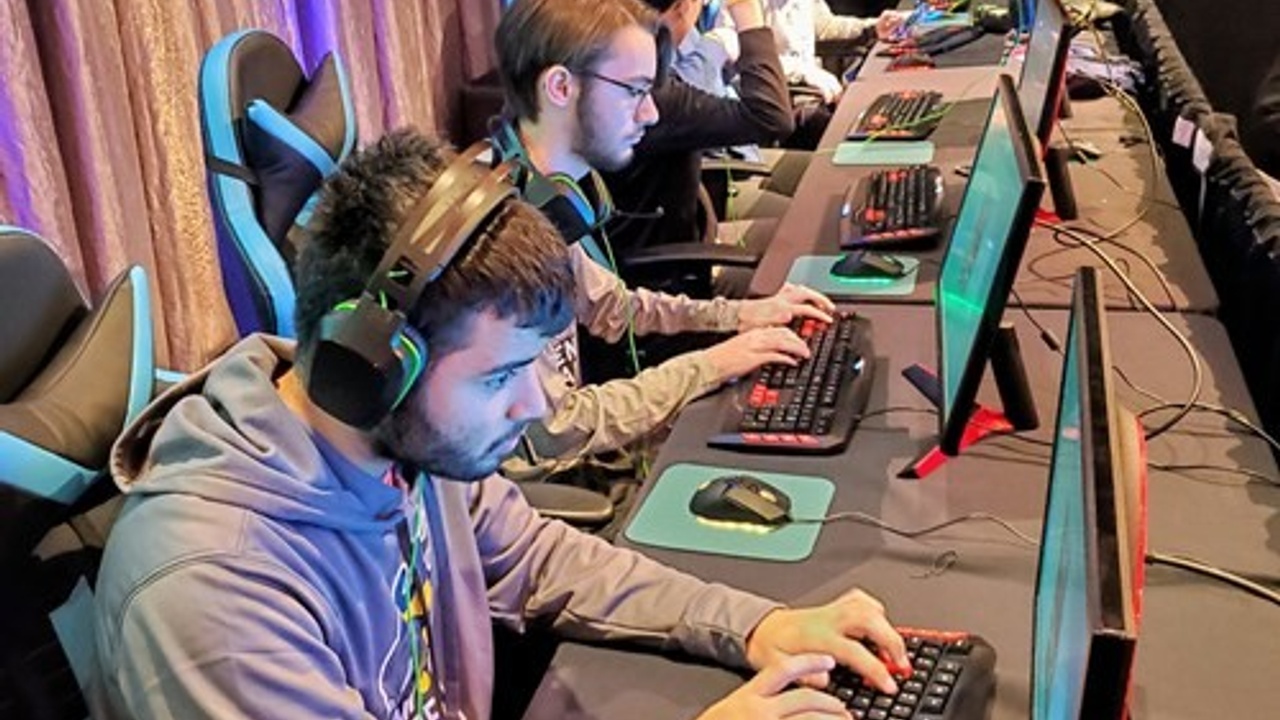 The Emerald Foundation in Lancaster, PA hosted an esports tournament on the weekend of February 21st for area high schools in Lancaster County. In attendance was Conestoga Valley, Manheim Township, Lancaster Catholic Day School, and many others. The two-day event provided time on both mornings for League of Legends to play a bracketed tournament, and then time in the afternoon for Overwatch to do the same. The Foundation provided equipment, food, beverages, news coverage, and a great atmosphere for the event.

Jariel R. is a senior at Penn Manor and plays both League of Legends and Overwatch. For the Emerald Foundation Esports Xtravaganza, he played both games for both teams.

His experience playing at the Emerald Foundation was fun; he recounted that playing on stage during the Overwatch section on day two was an invigorating and thrilling moment. He actually felt like he played better in the high stakes environment with the crowd watching him than he did during other moments gaming at the event.

There was no pressure when being watched by the spectators. When asked if this was common with other esports players, Jariel remarked he believes so because otherwise, that would have to be an obstacle they would need to overcome. He speculated that this could be different from other sports that are played in person and due to the nature of the screen, the players don’t know who or how many individuals are watching. Additionally, the hero or character they are playing is not a direct version of themselves, it is a tool they are performing through.

With that in mind, Jariel was only overwhelmed prior to gaming, as he was first entering the Foundation and witnessing the music, lights and crowds for the first time. Once he was logged into the game, though, he was no longer taken aback and was able to enter his element and find his comfortable space.

The only instance when Jariel was distracted from the game was during a match when it was difficult to hear because the other team was yelling quite loudly. The Penn Manor team could hear their opponents over their own mic systems, the music playing, and the shoutcasters.

Reflecting on the tournament experience, Jariel thought he would be more nervous in the professional environment, but he was not. He assumed that maybe if they were in a bigger stadium with a loud crowd present, that nervousness could still be present.

Jariel was also thrilled about the free Esports Xtravaganza shirt the Emerald Foundation provided for all the members of the team.

Alex A. is a senior player for the League of Legends team and played in that capacity for the Emerald Foundation Esports Xtravaganza.

Alex’s experience at the tournament was very good, and he appreciated that the Emerald Foundation treated the event very professionally and had the technologies and tools all together to optimize playtime for the League teams.

Alex enjoyed the great atmosphere, complete with a lively soundtrack and lighting. He was pleasantly surprised by the amount of people attending the event that were not players, purely spectators of the sport.

The amount of people didn’t make him uncomfortable while he was gaming since he was not interacting with individuals in person. He felt that the distance provided by the screen and the three-minute delay created a comfortable gaming environment.

The three-minute delay that was present for spectators not watching on the players’ screens is not present on a pro-level. In professional games, the spectators in the games are live and they create a more immersive experience for the viewer.

Alex recalled that the music at some instances during the matches was a little distracting and could still be heard over their microphone communication, causing them to have to speak loudly to communicate about their movements.

With regard to practice after school versus performing at the tournament, Alex stated that it was a little different than practice due to the other teams they were playing. The other groups at the tournament were mid-ranked and played more seriously. Penn Manor’s team had to make an adjustment after their first match to figure out what configurations fit this new setting, and they determined that the midlaner position needed changing, which he then played.

Clay C. is a junior player for the Overwatch team and played for them during the Emerald Foundation Esports Xtravaganza.

Clay found the overall experience of the tournament was not intimidating, but fun and different. He enjoyed the change of pace and scenery as well as networking with other players and teams.

Clay recounted that he really enjoyed himself and connected well with the Emerald Foundation staff.

Clay noticed that the music and the lights were quite intense for the event and it was hard to hear sometimes. He remembered that one stage light, in particular, kept flashing in his eyes during the first game, but they were readily moved from that position and were able to relocate to another area of the tournament.

The Overwatch team had been out of practice for a period of time due to their disjointed match schedule with HSEL and other extracurriculars members of the team were committed to. Clay noted that it was nice to play with all members of his team at the Emerald LAN event and it reminded him of the fun his team has playing in the NASEF matches. The competitive environment took them a moment to get back into the swing of it, but the Overwatch team did well in the tournament and he was pleased with the progress they made in the brackets.

Clay stated that it wasn’t intimidating to know that people were watching him play, rather it was exciting. He thought that some players might have been nervous, but he was not. He looks forward to participating in the Emerald Foundation’s esports events in the future.

As the experience comes to a close, Penn Manor’s esports program thoroughly enjoyed their time spent with the Emerald Foundation. The team members learned about playing in a professional setting, were able to enjoy themselves, and were grateful to participate in such an educational experience.