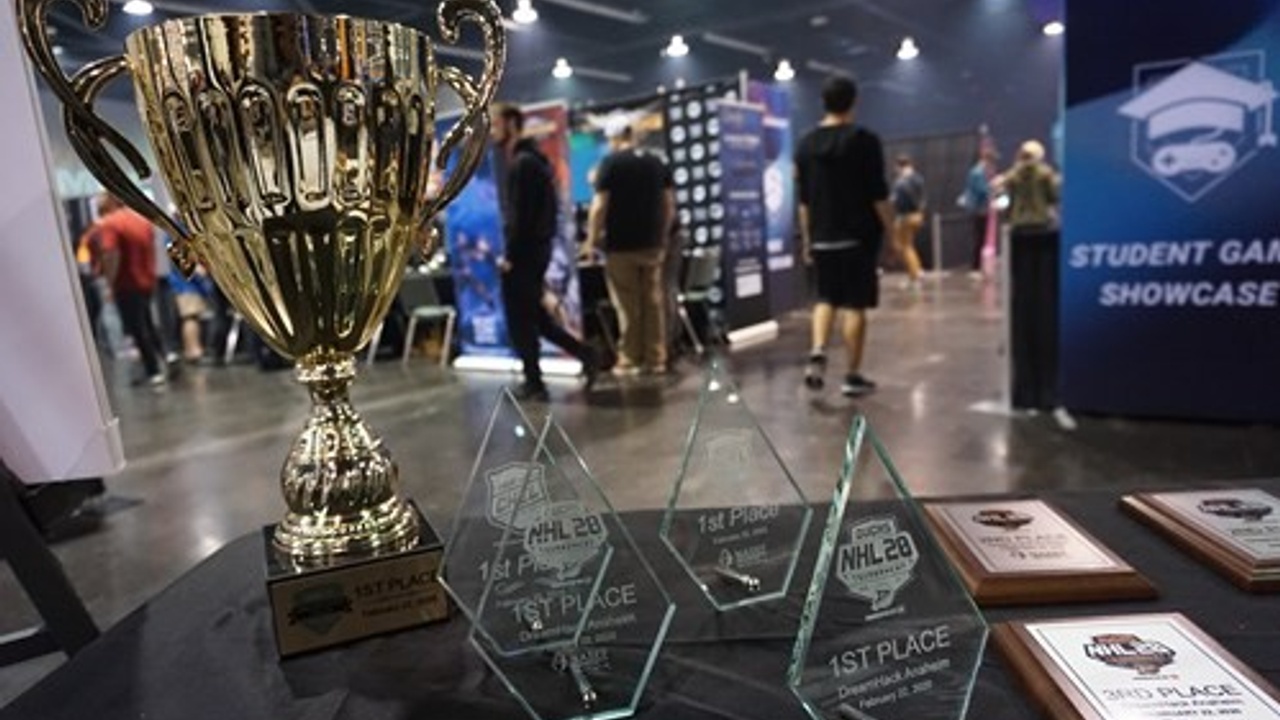 Last weekend, competitors from across North America hit the virtual ice as they battled for scholarships and notoriety in the 2020 Chel Invitational at DreamHack Anaheim.

Players in this NHL20 event qualified in regional matches hosted by NASEF and the Anaheim Ducks, LA Kings, Vegas Golden Knights and Florida Panthers. Local youth and adult winners received a trip to Southern California to compete in the live finals event on Saturday, February 22.

High schoolers local to the partner NHL teams competed in the 2020 Chel Invitational. The exciting matches led to the following winners and awards:

As the winner of that competition, Zachary progressed to the Coastal Cup to compete against NASEF’s winner from the rest of North America. In that bracket, the winners were:

What makes NHL teams like the Anaheim Ducks, LA Kings, Florida Panthers, and Vegas Golden Knights unite for an esports tournament? Why would these rivals join forces in putting on an event? Simple: it’s an opportunity to connect with young fans, build community, and support STEM education.

Logan’s family has been avid Florida Panthers fans since the club was founded. He proudly wore his jersey covered in pins commemorating his favorite games and plays of the on-ice team. “It is a dream to represent the Panthers in esports because we love to watch them play,” he said. “My dad’s had season tickets since 1993 when they started. It’s crazy that now I get to play for them!”

Mark Deppe, commissioner of NASEF, said, “Esports helps build teamwork, imagination and skills while creating friendships that go beyond just the game. This is a great way to connect hockey fans through their love of the sport and passion for gaming."

Family pride was evident throughout the event. Kaden’s older brother sat close by through the whole event, cheering on his brother and proudly supporting him.

Sarah V. Nick’s mother, was absolutely thrilled at her son’s opportunity to play in the tournament – and that was BEFORE he won! “I’m so happy to have him playing games in NASEF because it’s such a safe environment. To think that he could use his talent in esports to win a scholarship – this is a dream! Thank you NASEF!”

Merit Tully, Vice President of Marketing for the Anaheim Ducks, said, ““It was a great step further into the esports landscape for our organization and the other NHL teams that joined us over the weekend. The size and scope of the event was truly impressive, and teaming with Visit Anaheim, NASEF and the organizers of DreamHack allowed us to expose our sport to a whole new audience while adding value to attendees, many of whom commented that they enjoyed watching and playing competitive hockey on screen for the first time.”

Like all traditional sports, hockey is gaining momentum in the online game version. NASEF generally focuses on education and youth, but it worked with the NHL franchises to manage the 2020 Chel Invitational for adults. The teams were able to benefit from NASEF’s experience hosting and managing tournaments. The adults will be honored by their local teams with prizes ranging from game tickets to team memorabilia to player meet n’ greets.

“This tournament has been really cool because it’s connecting us with people who are LA Kings fans online, but they don’t usually go to the games,” said Pat Donohue. “This is a great way for us to bring in a whole new group of fans.”

Hockey fans, stay tuned to NASEF’s website next winter for announcements about the next NHL tournament. Meanwhile, check out the variety of tournaments offered now for high schoolers, including League of Legends, Fortnite, and Super Smash Bros. It’s simple to activate a club, free to join NASEF and free to play in tournaments. Don’t miss out on the fun!