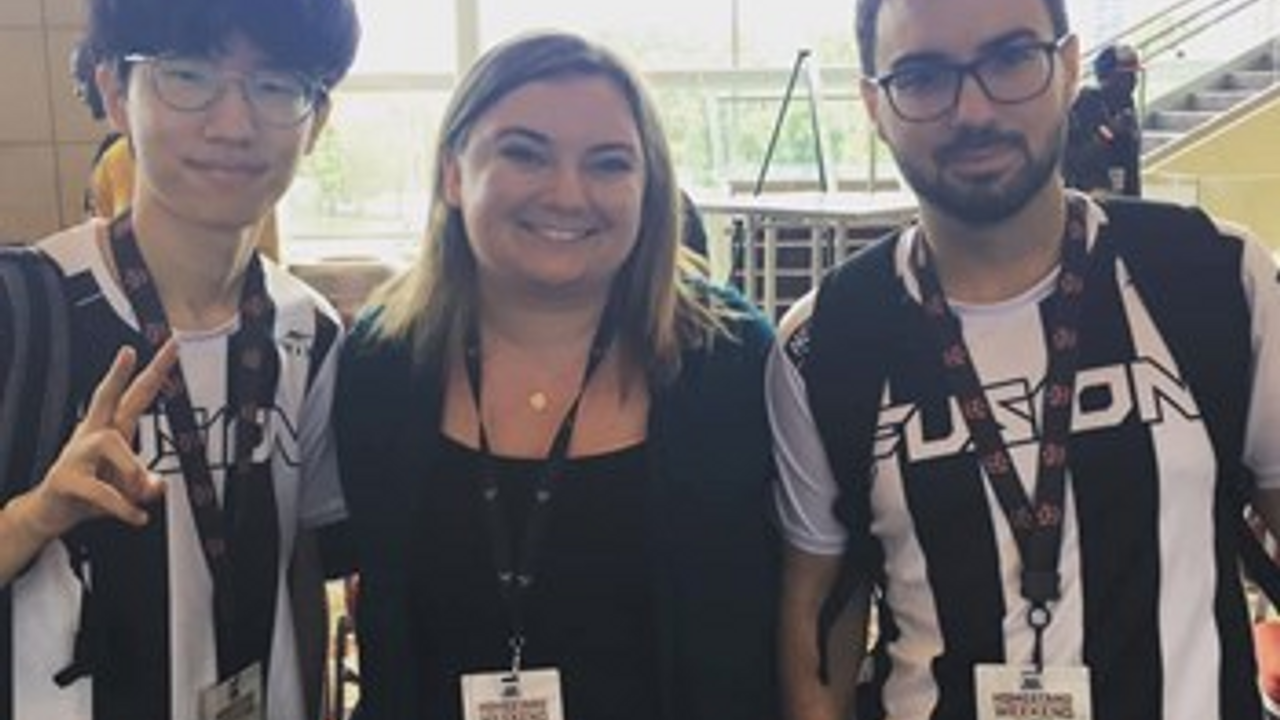 Social media is an important part of every company, from the new taco stand on the corner to the multi-national conglomerate. Esports is no exception. Esports grew up in the age of social media and a team without a strong social media presence won’t get far in today’s environment.

To that end, we talked with Kate Shepard, who is the Social Media Manager for FlyQuest. Dig into what it’s like to operate a brand account remotely, what it means to talk in a brand’s voice, and more in this interview.

How did you first get into esports?

In general, I didn’t get too into video games until college. My first introduction to gaming was a Game Boy Advance my mom got me in an attempt to get me to stop biting my dentist. It only mildly worked (laughs). Other than that, video games didn’t have an impact on me until high school. My sister was more into gaming than I was, and she convinced our parents to get her a PS3 and I would watch her play games like Uncharted or Assassin’s Creed, but never played myself.

In college, I started dating a guy who was really into gaming—big on the fighting game community—and he took me to some of the small tournaments that were local. But it wasn’t until Overwatch came out that esports grabbed my attention.

Overwatch kind of changed everything for me, actually. Watching the trailer was kind of love at first sight. I was so enamored with the art style—there was a talking monkey. I was hooked automatically. I love Winston, he’s my favorite and I wish he was more viable.

I started watching Apex on and off and I became a big-time EnVyUs fan. After I graduated, I finally built my first gaming PC and played the game myself. I also started watching more of the competitive scene and learned more about the ins and outs of the game.

When Overwatch League was finally announced, I was so happy, and I was determined to be a Dallas Fuel fan because EnVyUs was my team. Long story short, that didn’t happen, and I became a fan of the Philadelphia Fusion and the LA Gladiators.

The Fusion were just the wildest team I had ever seen. I was so about their gameplay, especially in season one. It was so much fun to watch. I would go back and spend hours watching and analyzing VODs of their games and drove my friends IRL crazy.

I came across an advertisement on Reddit for a site that was having writers talk about OWL, and my friends threatened me into applying so they wouldn’t have to hear me talk about it anymore. I took my shot; I applied for a position at The Game Haus and the rest is history.

One thing that stands out to me about you, is that you’ve made your way in esports while being remote. Can you elaborate on the challenges and benefits of making a career in esports like that?

I’ve been remote this entire time. The only time I’ve gone to an event and worked it was the Atlanta Homestand. The biggest challenge being an OWL reporter was not having a physical presence at the Blizzard Arena. I wasn’t able to make as many connections I would have liked to with players, staff, and fellow journalists.

But I think I overcame that barrier in a big way because of my personality. Online, I was able to make more connections than I thought possible. I am a huge dork and I embrace that. People seem to gravitate toward that for some reason. I am just very enthusiastic about esports, to the point where I’m sure people had me muted on game days because I liked to live-tweet my thoughts.

People always knew my thoughts about what was going on. Usually pain and suffering because the Fusion liked to take me to map 5. That, along with providing a fairly solid analysis for my teams helped me establish a presence as a writer.

Not living in LA was probably more beneficial for me because it let me carve out my own path and I’m very thankful for that. I think it makes me a bit more unique and helps me understand other people’s perspectives in esports as a whole.

How is it working for FlyQuest, which is wholly based in LA, remotely?

It’s challenging. Mostly because I like being with people, though. I feel a bit disconnected at times, but my team is really great, and they’ve been super welcoming. They really make an effort to make me feel included.

Can you tell me a bit about your day-to-day activities?

I spend the majority of my days working with my content team. The majority of what I do is write copy to promote our initiatives, talk about our matches, and have general interactions with other brand accounts.

I also spend a lot of time researching and studying. Whether that’s for LCS Aquarium or general marketing plans, I’m just constantly learning something and applying it to what I do.

Our busiest times are on the weekends, just because we have so much going on.

You mentioned interacting with other brand accounts there, do you all have a group chat where you can coordinate with each other? Or do you just know each other and know how to play off of one another?

It’s a bit of both. We do have an LCS group chat, but it’s pretty organically. If I see Team Liquid has a post and I think I can reply to in our voice, I’ll interact with that, and they’ll do the same.

Speaking of voice, brands all have different voices. Cloud9 has Portilho who memes all the time, meanwhile FlyQuest has built its brand on being a “Green Team” over the past year. Can you expand on how you speak with that voice and how you craft that voice as a Social Media Manager?

Actually, my natural voice is the reason I was hired. FlyQuest is an incredibly unique organization. They really do believe in their message of “Showcase Greatness.” They do their best to showcase greatness in everything that they do. Coincidentally, that’s my natural mindset. I’m always striving to learn and do better.

FlyQuest, for me, is kind of the Leslie Knope of esports organizations. They’re positive, they’re passionate, and they care so much about their community and the environment. I’ve always personally identified with Leslie Knope. So FlyQuest’s personality comes super easy to me because it’s something I already identify with.

That doesn’t mean there isn’t a lot of thought behind the posts. There is. But it means that my gut reactions when crafting copy are right on the nose.

One other thing I’d love to touch on is the person managing the account in a few different ways. What would you say are the most critical skills a social media manager should have?

I would have to say adaptability and having a good sense of humor. There’s always a lot going on behind the scenes and plans often change, so you have to be able to think quickly on your feet and adapt.

As for a good sense of humor, I don’t just mean when it comes to making memes. It means being able to laugh things will help you roll with whatever punches you’re thrown. Those two things go hand in hand and will help you become more successful over time.

Is there anything about your job that people not in the know might consider surprising?

I’m fortunate that I get to work with a content team. I’m used to having to make content on my own and our marketing department is incredible. They do everything from our videos to our graphics. Insanely talented people.

I thought I would be doing a lot more in that aspect, but they’re super receptive to my ideas. I’m still putting in a lot of effort, but it’s not nearly as hands-on as it was when I was a writer.

What should people consider when interacting with brand accounts? I imagine it’s along the lines of there is a real person behind the account.

Yes. That’s the biggest thing. I’m really lucky because FlyQuest has a great fan base. Our initiatives and our branding are so positive that most of our interactions on social media are positive because that’s the kind of people we attract. Even when the team is losing our replies are usually positive.

The occasional ugly replies we get don’t really have a big impact on me as a person because the positives outweigh the negatives. But I know how people can be toward teams that might not be performing as well.

My general advice is to always be kind to others, even when you’re frustrated. At the end of the day, that person is going to go home and think about what they saw, and we see everything.

If a student wanted to manage a social media account in their future, what would you suggest they start doing now?

Definitely study what other brand accounts are doing. Consider what you personally like or dislike about how a team portrays themselves online. A lot of the teams I became fans of, including FlyQuest, were because of their branding.

Ask yourself important questions: What is their voice? How do they promote X or Y? Think about what you would do to elevate their team if you worked for them. Be proactive in your studies of what you can do to be better at that job.

If they’re looking to build a portfolio, would you suggest they take some initiative a team did and make their own version of it?

Definitely. We’ve actually had a lot of students throwing in their own ideas. We had one person throw out their own idea of BeeQuest, which was their own marketing plan for their own school. It was the cutest thing and we all loved it. I like seeing more of that kind of thing.

At NASEF, we’re also all about scholastic esports. What are your thoughts on it?

I’m really happy to see more schools embracing esports. If schools start taking esports more seriously, so will parents. I think that’s really important since I know a lot of parents are still on the fence when it comes to gaming due to the negative general mindset toward gaming.

My own parents were a bit wary of me getting into games journalism just because of that. I think having courses dedicated to different aspects: marketing, social media, and the like, will not only educate students but spread a more positive message that this industry should be taken more seriously.

This is going to sound super cheesy, but everything. I love how diverse esports communities can be. I love the different languages each community has. Like a C9 in OWL is a huge meme, but in LoL, they’re the gods of the LCS. It’s just so different.

I love the adrenaline rushes that come with watching high-level gameplay, I love bonding with fans when the teams win and coming together when they lose. There are so many different aspects of it that bring me joy.

It’s my favorite thing if you can’t tell.