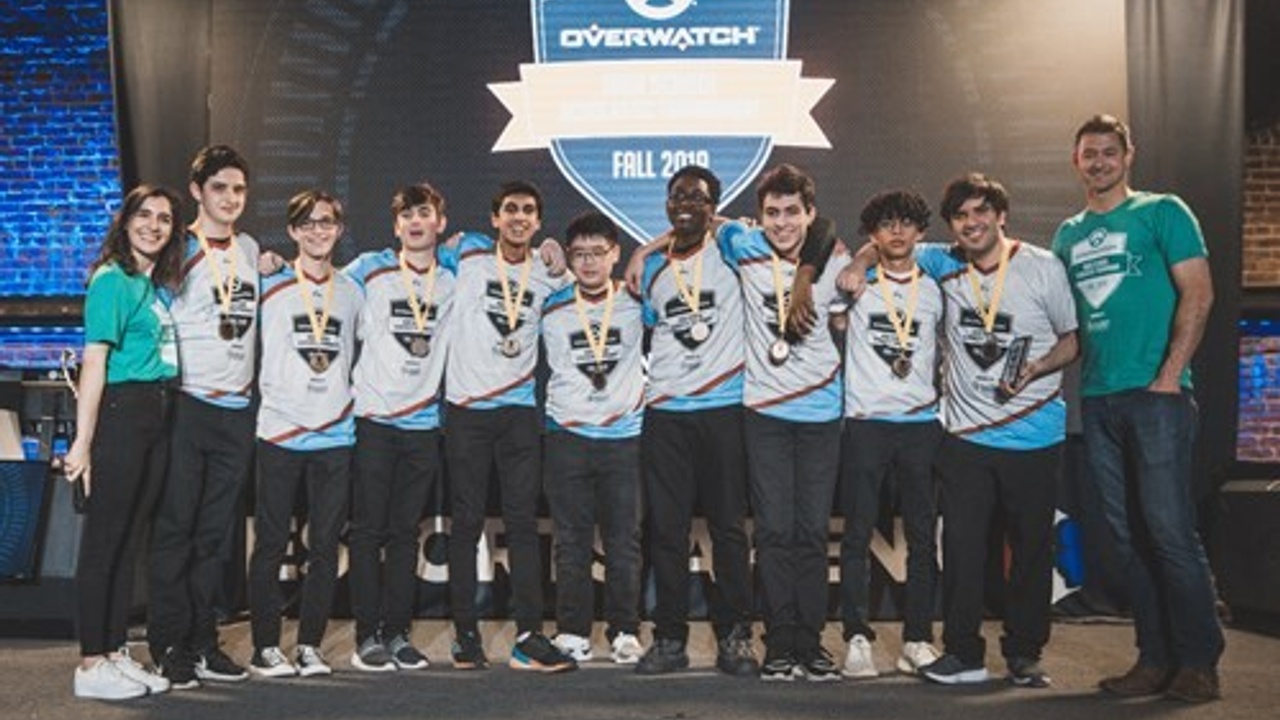 Our largest tournament to date, the 2019 Overwatch High School Scholastic Tournament had over 100 teams competing throughout the season! After 6 weeks of matches and back-to-back playoff games, the top four teams across North America met on stage at the Live Finals Event to determine the number one team of the 2019 Fall season.

Community members, high school students and their families gathered at the Esports Arena in Santa Ana, CA for an exciting day of matches. Registration for the event was completely free, and guests were free to join in on the festivities like our Smash Ultimate tournament, Shoutcasting Booth, Coaching Booth, Cosplay Photobooth, community art mural and more.

Local high school students in NASEF Clubs signed up to volunteer for our Live Finals. From tournament administration with Smash Ultimate to shoutcasting and analyzing tournament matches as on-air talent, students filled out roles within the esports ecosystem.

Rocklin, a school from Rocklin, California that just joined NASEF in the summer of 2019, entered the Finals bracket as the number 1 seed. During the regular season, Rocklin defeated veteran NASEF schools such as Troy, Cypress and Woodbridge High School for their spot in the playoffs.

Portola High School, an older NASEF team local to Irvine, California, was seeded low into their playoff bracket after dropping 3 regular season matches. However, Portola knocked out several strong teams including Westminster High in the playoffs finals to advance to the Top 4 as the number 4 seed.

Rocklin’s strategy of protecting their most valuable player, Eugene “Dash” T., dominated Portola during the Live Finals and secured their spot in the Finals match. Rocklin’s support team, Carson “Pied” W. and Michael “RadianLight” J., were essential in the execution of this strategy.

Naperville North, a team from Naperville, IL, went completely flawless during their entire run in the regular season and playoffs. Without dropping as much as a single game, they easily advanced to the Live Finals event as the number 3 seed.

Naperville and Xavier went head to head during their match. Each round was incredibly close, and hard-hitters from both teams like Joshua “xSnowily” S. from Xavier and Ryan “Found” P. traded win after win. Naperville showed that they were the stronger team, defeating Xavier with a 3-0 and moving on to the Finals match.

Regrouping after their losses earlier in the day, both teams had one last match left before the competition was over. Students and support staff huddled to strategize then loaded into the game as they made their last stand. In the end, Portola defeated Xavier, placing them at Third and Xavier at Fourth for the entire tournament.

Rocklin, being the number 1 seeded team in Finals, and Naperville, the undefeated team of the tournament, finally met on stage for the Finals match of the season.

Each map was incredibly close, with Rocklin pushing their team just past Naperville in each round. Naperville General Manager Chris Terpstra regrouped his team after each map, discussing ways to shutdown Rocklin’s momentum. After three maps of neck-and-neck competition, Rocklin came out victorious as the number one team in the tournament.

Rocklin High School took home a $2500 grant for winning first place, which will go directly to their school. Thanks to the generosity of HyperX, all four teams received limited edition Gold HyperX Cloud headsets for their competing roster. Each Top 4 team also received customized NASEF Jerseys, a tour of Blizzard Campus and the UCI Esports Arena.

We’d like to thank our community for coming out and tuning in to celebrate the NASEF Overwatch Live Finals.