Careers in Esports: Adrian Gale, VP of Merchandising and Licensing at Cloud9 Esports 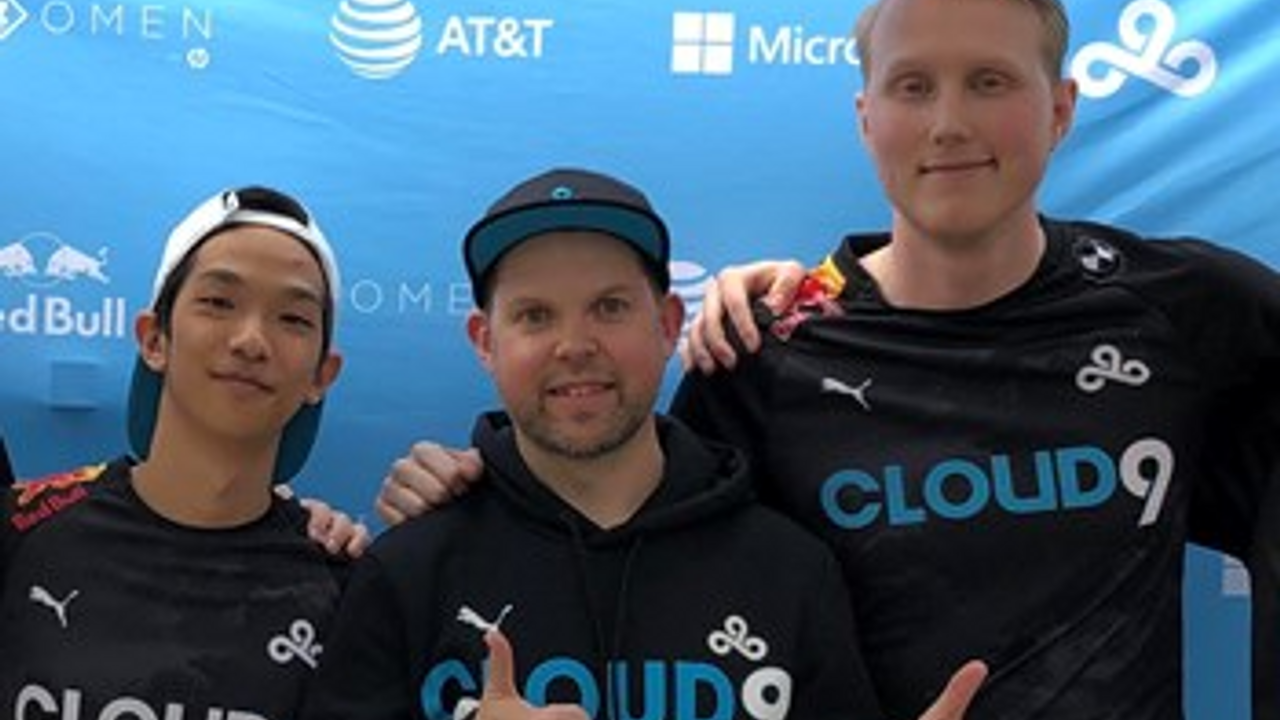 Fans of teams, whether traditional stick and ball sports or Esports, will always want to support their teams. Merchandise, often in the form of clothing, is one of the easiest ways for fans to show that support. Over the past few years, we’ve seen esports clothing take rapid twists as teams, streamers, and brands create their own clothing and merchandise, some better than others.

With that, it felt important that we talk with someone who works both in merchandising and in esports. Adrian Gale, Vice President of Merchandising and Licensing for Cloud9 sat down with us to talk about how Cloud9 approaches designing their clothing merchandise and how to work with established retail brands. In his previous roles, Adrian has worked with brands like Pelican, Huf, and Nike.

To begin with, can you tell me about your role with Cloud9?

I’m VP of Merchandising and Licensing for Cloud9. I’ve been with the company for a little over two years now. My background is in apparel merchandising and brand management, primarily in the streetwear/skateboarding/action sports space. I’ve been doing this kind of job since the early 2000s. I’ve been at it for a while.

My role at Cloud9—we’ve had an exclusive partnership/sponsorship with Puma sportswear and that was the catalyst for me to come in. Going from your standard block-and-tackle merchandising business of making jerseys and T-shirts and putting on the store and hope they sell, to diversifying our strategy. So we partnered with Puma and work with them and their seasonal calendar to create a proper merchandising strategy across categories: working on footwear opportunities, actual product innovation, and eliminating pain points and distractions for the esports athlete versus just creating a standard soccer jersey or t-shirt as a uniform. We’re actually creating things that are purposeful for our players.

Beyond that, really just figuring out a proper strategic business strategy for us to build out our merchandising footprint for the organization. We have teams and fans across the world, but we have teams in Europe, we have teams based in Korea, and we have a huge fan base in Brazil. Part of the bigger picture is figuring out how we can cater to a global fan base.

I want to ask a bit more about fashion design. You mentioned that a lot of teams will just get a soccer jersey, throw the team logo on it, charge $80 and call it a day. Why is it important that you and Cloud9 took that extra step to deliver with fashion and esports?

When you look at our consumer insights, a lot of general esports fan base is bi-coastal, like New York or east coast and southern/northern California. There are patches across the country, but when you look at those two main consumer subsets they’re more open-minded and forward-thinking than other areas of the country. As a result, they’re looking at other things beyond esports: they’re looking at fashion, pop culture, influencers outside of their favorite esports team. With that in mind, we want to make stuff that people feel comfortable wearing every day and outfit with everything else they bought from a sporting goods retailer or other brands.

So that was the driving force behind trying to build stuff out that has some purpose and meaning. Also, I think it’s important to appeal to a mainstream audience and deliver stuff that actually shows up on other mainstream channels to really create a broader appeal to esports. Just so we’re not so pigeon-holed, right? Just to broaden the perception of what esports is and what he esports fan is. There are some cool people in esports.

You do a lot of work with Puma. When you work with an established brand like Puma, how do you make sure your designs for your clothing stay true to the esports vibe while marrying traditional retail?

It’s a process. The other thing to take into account is that it’s generally a 12-to-18-month cycle, depending on what the product line is. We’re really far out in terms of our ideation.

We come to them with a point of view and the key beats and moments within our world, and also anything that we feel is important with the brand narrative to focus on, and they’ll come to us with a couple of things. They’ll show us how they want to innovate in the space and create stuff that is purposeful for gamers and esports fans. Another thing is the trend forecast of what’s working within the greater Puma ecosystem that they think Cloud9 should do because it will sell well and the buyers at Footlocker and/or PacSun will buy as well.

You mentioned brand narrative there with clothing and I think that’s not something a lot of people would consider. Can you talk a bit more about how the clothing a team puts out affects the brand narrative and voice?

I think it’s important to connect the dots. C9 has a persona, right? The historical meme team, feel-good, don’t take us too seriously, but we also play to win. We compete seriously but have fun doing it.

So we’re not going to sign off on a grungy, edgy, cyberpunk apparel line that doesn’t align with our brand narrative or the story that Cloud9 tells through our social media and players. We want to make sure the feeling of Cloud9 carries over into the apparel if that makes sense.

100%. A team like 100 Thieves has that streetwear brand and seeing Cloud9 merchandise on the 100 Thieves store and vice versa would be pretty jarring for the fan bases.

Yeah. And we do take into account the superfan feeling and making sure that those people are still being heard as part of the process. We want to keep moving forward, keep evolving, and innovating in the space. We want to make sure there’s a link to Cloud9 as a whole without just doing the same jersey or blue t-shirt with a white logo on it every season.

Seeing a C9 t-shirt in PacSun or C9 Puma shoes in Footlocker is going to open the door to those who don’t know esports. It’s going to lead to them doing research into what Cloud9 and esports are. We hope they’ll become a fan of Cloud9, but if they don’t we’ve at least captured a new fan for esports.

What are some important things to remember when you’re designing and collaborating when designing clothing for esports? Like specific designs to stay away from or how it looks on a shirt? Are there specific things that fans just hate?

We always try to keep a nice healthy middle ground between taking some risks and going all out. There’s still a large component of the fan base that isn’t so brave to step out in some crazy luminous blue with a reflective silver print shirt. We like to have fun with it. You’ll see it in our latest line that we added some elements of hyper neon yellows. These are accents to add a bit of fun to our clothing, but we fundamentally need to be recognized as our brand. At the end of the day, we need to make sure we’re not going so far out on a limb that it doesn’t tie back to what Cloud9 is in the first place, which is a competitive esports organization.

It’s also about what’s going to sell. What’s going to sell in a load of different channels rather than just on our store. You can go out there and make something really crazy, but is it going to sell enough units to justify it? There are also those commercial considerations you need to take into account. If you’re only going to sell 100 of this wacky jacket that you’ve made, how much energy do you put into it and what’s the return on investment (ROI) on that time, energy, and money spent on it versus 1000 t-shirts?

Final thing, what advice would you give those looking to get into the fashion design and merchandising side of esports?

My experience wasn’t esports first, but I always played video games. So I understood the world of esports, but it wasn’t at the front of my mind. Anyone who wants to enter this space needs to look at building up their skillset and fundamentals. Do the stuff that kind of sucks, do the trade, learn merchandising, work at retail, work at another clothing brand. The people we hire—my merchandising manager has a degree in merchandising in textiles.

Personally, I look for people that have an authentic experience in merchandising and fashion. The esports component is a bonus. It’s important, but it’s definitely a bonus. If you don’t have fundamentals of understanding e-commerce or understanding brand merchandising it’s concerning. Esports is very teachable because it’s so new and fresh, but the fundamentals side of things is very hard to teach on the job.

I agree, I’ve definitely seen that shift in the industry where many organizations are looking for that concrete experience rather than just pulling their friend in to work with them.

Yeah, and I’ll call them out because they do a great job, 100 Thieves and Team Liquid do a fantastic job with their merchandising. The people they have at the helm of that are people who are industry veterans who have done this sort of thing for a long time. That’s why they’re doing well and that’s why we’re doing well. They put the right people that know how to manage the business in those positions.

All photos from the Cloud9 store. All products highlighted are part of the Spring 2021 collection.