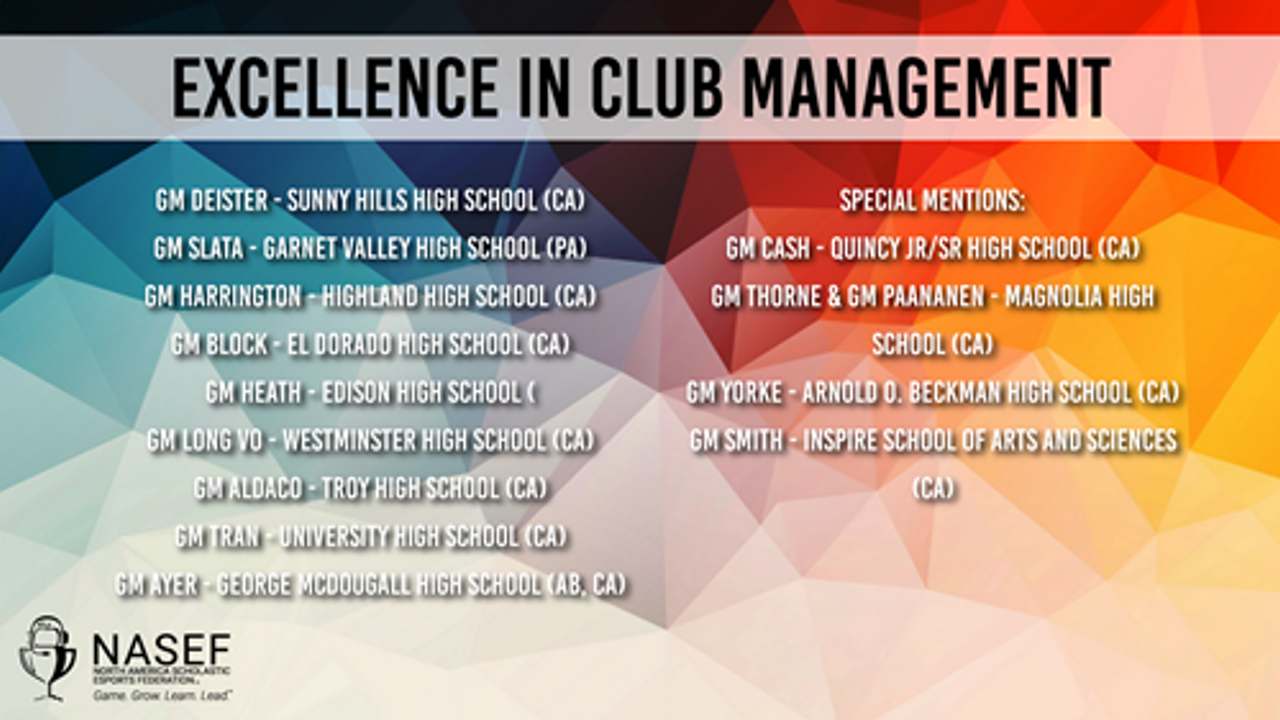 Our 2018-2019 year has come to a close. We’ve gotten to know so many of our high school esports clubs, advisors, students and their families in our federation, and we’re proud of their growth throughout the year

We want to take the time to acknowledge the superstars in our community, so we asked all members of our federation to nominate their best students, General Managers and coaches for recognition in specific aspects of the club. Following are their responses. What a tremendous testimony to the benefits of esports clubs and teams!

These General Managers have received nominations from their students for Excellence in Club Management. The support that teachers, club advisors and administrators give to students is crucial to student growth and success.

“Sunny Hills High School's General Manager Mrs. Myra Deister was a major help for the players of Sunny Hills. She supported and managed the club.”

“GV eSports, Garnet Valley, Mr. Anthony Slata, he helped keep everyone relaxed and having fun while also being a GM of all of our teams including Rocket League, Overwatch, Super Smash Bros., and League of Legends. He also arranged meetings in his room and also helped bring many ideas to the table, especially for our constitution as well as fundraising opportunities.”

“He was the only teacher that would deal with us, and he had to give up time with his newborn child to help us reach playoffs.”

“He clocked in well over 15 hours having a facility so that the overwatch team could practice. He also had the facility open 2 other days for any student to come in and play and enjoy gaming in a tight knit community that he fostered with parties and giveaways. He listened to the students when they asked for the ability to play smash and got them a TV so they could play. He is a great GM and did an amazing job to make our schools esports community more involved.”

“Edison High School has an excellent General Manager, Shane Heath. He has helped me out immensely with starting and developing this club. He manages all of the different teams with dignity and grace. He is a strong advocate of eSports and that is important for a manager to have when they are leading a group of young minds in the industry of eSports. Shane Heath is an outstanding individual with great ideas for the future and deserves the best.”

“Mr. Vo, the first-year advisor, helped Westminster High School and the Huntington Beach Unified School District tremendously. He planned the STEAM Expo, a district-wide event which got featured in the LA Times. He spent countless hours every day after school helping players and students grow as a person. Whether it's helping them with their homework or helping control students emotions, Westminster Esports are extremely grateful for having an Advisor like Kim Long Vo.”

“I feel he has done more than enough in order to expand this club. He is a busy man and yet still has time to help this club grow.”

“He was our manager for two years now. He believed in our capabilities in succeeding on our own without a coach. We were able to bond together as a team and really discover what worked and what did not without the help of a coach.”

“Mr. Tran deserves this award because he always listened to our opinions as a team before making a decision. He also was very proactive in both scheduling scrimmages and communicating with NASEF and other teams. This season would not have been great without him.”

“I nominate Mr. Ayer from George McDougall high school for his overall commitment and dedication to bring the esports scene not only to Airdrie but a pioneer in high schools all over Canada. His excitement and involvement in the previous years events is what convinced me to join and even through server struggles throughout the year provided motivation and imparted his dedication to me and the rest of the team.”

Students definitely recognize and benefit from all the time and effort their General Managers are dedicating to their Clubs!

Our Connected Camps coaches are vetted and trained to work with high school students to help them improve game skills and develop personal qualities and skills that help in games and in life. They come from all over North America and bring their unique backgrounds and skill sets to the table, and provide their experience in esports to build up our teams. Here are the coaches nominated for Excellence in Coaching.

"At first we didn't really think we needed a coach, but we ended up with the best one possible, all 3 of his teams made it to playoffs and he's the nicest and coolest guy, we started with a coach but ended up with a friend.”

“El Dorado High School, Placentia CA, Coach Ryan, he’s from Florida. Not only did he spend countless hours a week with us at practice, and on his own time reviewing our practices and games, but he was also the coach of 2 other teams, all while attending college. He taught us to grow as a team, as players, and most importantly as people. He taught us how to identify our own problems and fix them, allowing his teaching techniques to stay with us when we were in our matches. He also made sure that above all else we were respectful always to our opponents and each other, win or lose. Coach has been a committed and supportive coach through our two seasons. He even had office hours on top of all the time he spent with us at practice so that we could get more specialized instruction. He was a great coach in season, and in our second season he decided to join us out of his own choice, which means a lot to our players.”

“Vishal, he grew from coaching a high school team towards coaching a professional Overwatch team. He helped a various amount of schools earn a top 16 place and cared for his students tremendously.”

“The coach was really helpful, when our old coach had other things to do, coach kind stepped in and helped us make it very far this year.”

“Coach Lauro should receive this award because he always looked out for the team and allowed the entire team to have a fun season. By keeping practices and games both casual and serious, he made it so all the players were interested in every practice and game. All in all, he was a really good coach.”

“Coach Lauro served as the Uni HS coach for both Overwatch and League of Legends.  He went out of his way to make sure our team had the best learning experience.  He was always present for every practice and match. He made VOD reviews so he could go over game play with the teams.  Coach always had a positive attitude and demeanor when interacting with students. We were so lucky to have him as our coach.”

In addition, some of our teams have coaches of their very own!

“Coach Casey was of major importance in the win of Sunny Hills High School in the League of Legends tournament.”

“GV eSports, Garnet Valley, Mr. Bao Nguyen, I want to nominate Mr. Nguyen for helping manage our League of Legends team. He has helped bring the team together as well as talk with the LoL captains about lineups and who will play in which competition. In fact, because of Mr. Nguyen, the league team is the only one that holds competitions against other eSports teams and for that we are very grateful.”

“Soonik K. streamed on Twitch consistently for the team's practice and for entertainment.”

Huntington Beach Edison High School's very own Matt N. has gotten into streaming this past year and he keeps growing and growing. He started off with nobody watching him, but now he's affiliate and starting to get monetized. He really loves streaming to play and entertain his viewers. He is headstrong and is determined to make something of his channel.

“Alex N. and the other club members have built their club to over 150 participants.  They held numerous tournaments that were streamed and had a shoutcaster come to do play-by-play.  They organize, market, and make all arrangements for these tournaments. They have truly been an amazing group to work with and I am very proud to be their advisor.

Being a club under 10 members, we quickly expanded and made a name for ourselves in our school. We currently  have over 50 members since we combined with clubs such as our Smash Club into our community.

Alex arranged all of the meetings. trainings, and tournaments for the club.  His leadership has built our e-sports program here at LHHS. He has worked with outside groups and professional e-sports teams to help sponsor and build the program.  Not only has he helped our club, but he works with students at other local high schools as well to build their programs. He is a true leader in the High School e-sports realm.

“He has helped carry our team to victory. He is really well known for his sportsmanship and hardwork. He helps our team in every way he can”.

“He was very respectful of other's opinions, very positive during and off the game, his patience was great, and listen carefully to his teammates.”

"They are an excellent scrim partner and have an excellent community as well. We love working with them in any game and are always sportsmanlike."

“She created Troy_Esports website for our League of Legends, Overwatch, and EA Hockey Teams. Here is the link of her work: https://troyhse.wixsite.com/troyesports”

"(EA NHL Hockey 2019). He was broadcasting the matches for the playoffs and finals at the Esports Arena for NASEF & Ducks NHL 19 Tournament between the high schools. He was excited and did an excellent job streaming live and was not nervous. He give his honest opinion of the matches, very analytical, and was very confident."

Congratulations again to all of our recipients!