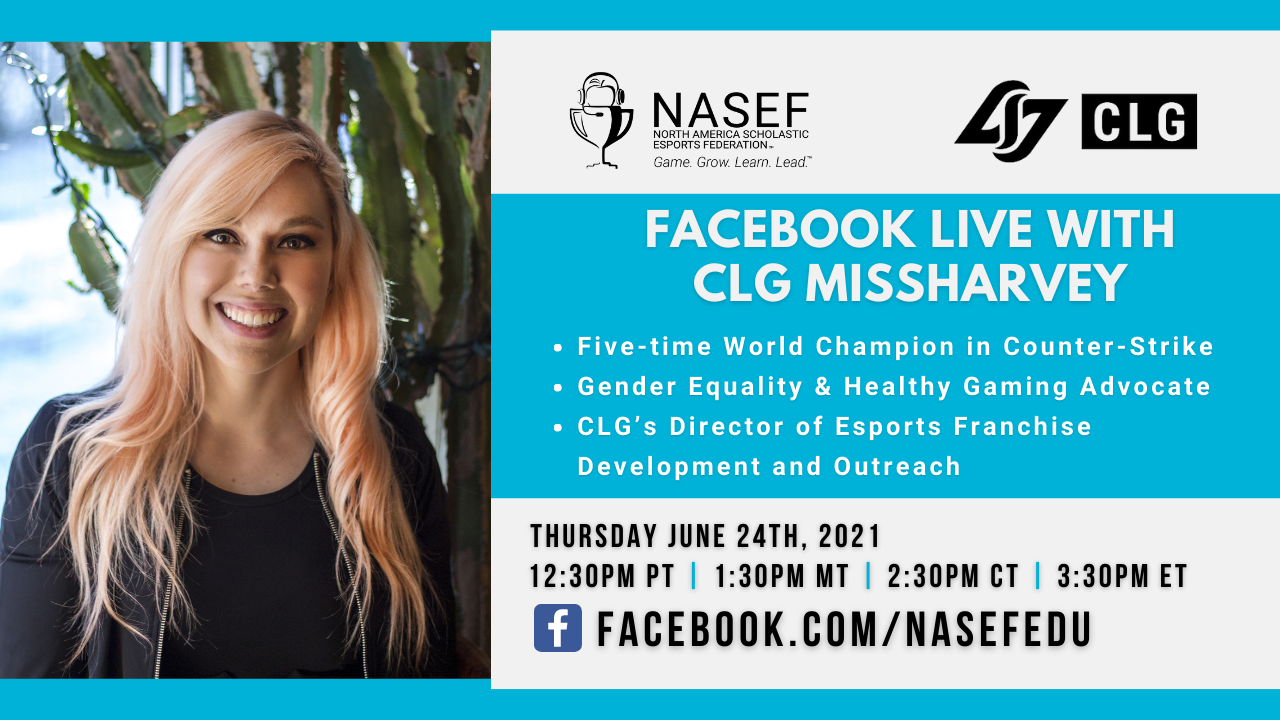 NASEF and CLG are partnering up to run four different summer camps for CLG’s Second Annual Junior CLG Virtual Camp this July. Attendees can attend any of the four camps for free, though the Minecraft camp will require a valid license on Windows 10 or iOS/Android to fully participate.

The four camps and their dates are:

For more information and to register for the camps use the following link: Second Annual Junior CLG Virtual Camp.

We sat down with Stephanie “missharvey” Harvey, Director of Esports Franchise Development and Outreach at CLG, to get an overview of the camps and their goals.

Can we start with a quick overview of what CLG is doing with NASEF for the Second Annual Junior CLG Virtual Camp?

Throughout the last year and a half, my role at CLG has been to create more opportunities within the gaming space that reflect our values and the way we at CLG want to be represented. This means continuing our diversity work, working on our culture, starting discussions with the community on some of our shows—one of the other initiatives was to create Junior CLG, which is our youth community at CLG.

It’s a little in the spirits of what the Junior Knicks and the Junior Rangers are doing and did last year during the pandemic. Everything is virtual and free. Last year we did more competitive summer camps—it was about League of Legends and Fortnite competitive and esports careers. Although it was great, we decided to try to shift our programming for our second year to be more targeted to what the current need of the youth demographic is. For the last couple of months, we figured out that the best way to do that is to swap the camps and have it be on Fortnite and Minecraft creative and really jump into what the NASEF community wants.

You mentioned a lot of values there, why is it a priority for CLG to reach youth like this?

During our camps, we have some of our player development coaches and therapists come in with tips and advice on how to consume gaming, how to be healthy, and how to perform better in the games because you are healthy.

We’re trying to create that interaction with everybody throughout the three weeks of camps. This is one of our priorities—yes, we want to make sure the kids have fun and can grow and learn something within the game, but it’s also making sure that outside the game they are healthy gamers. It’s really important for us. It’s the future of not only our fans and communities but potentially our pro gamers. We want them to do it the right way. We want their parents and family to understand it.

For me, a former professional player for 15 years, it’s really close to my heart. Nothing else fulfills me in my life other than having a mission to change things and make things better for everyone.

Two of the game-based camps are not about mechanical skills. They’re more about making the creative stuff in the game. The Fortnite Creator Camp is hour-long sessions every day where we’ll teach them how to create mini-games and custom maps in Fortnite. Our goal is to teach them to be creative in their favorite game. On top of that, our pro players, who are some of the best in the game, will be there not only to teach the kids but also to learn from them, as well. We think that will be a cool experience to do that alongside the pro gamers.

Our Minecraft camp is more about game development. Learning how to import textures and change what the game has given you. How to make whatever you want there.

Editor’s Note: You can read more about the Minecraft camp in our interview with Brian Dickman

Our VALORANT bootcamp is going to be focused on learning the game and the abilities. It will be getting you up to speed on what VALORANT is really about since the game is pretty new, only a little more than a year old now.

Which pros will attendees get to work with?

Because the competitive circuit is always evolving, we are unsure at this who exactly is going to be there for VALORANT. We are trying to have our VALORANT roster there, along with their coach. I’m going to be there the whole time.

We’re also trying to have our Fortnite Coaches and players there, as well as some of our staff. Even our Chess Grandmaster, Nemo! The CS:GO Red girls might join too! We’re trying to get everybody from every sphere, but it’s right in the middle of our League of Legends season, so it might be really difficult to get them to join.

What about the career-based camp? What is that about?

The career-based was really important to me last year and was an awesome surprise in how many kids showed up and enjoyed it. I think we had about 150 kids last year. It was our second most popular camp.

It’s really about discovering jobs and opportunities in esports. It’s letting the kids know how they can practice doing those jobs right now. A lot of the jobs are accessible right now to them—you can create content online, play games with your friends, or create small tournaments/events for your communities. It’s just about knowing what it means and what it could change. We invite parents to sit with the students if they want! It’s about really showcasing that, in gaming, it’s not just about pro gamers. Just because your kid isn’t a pro gamer doesn’t mean they can’t make their life about gaming for the various other jobs in the sphere.

This is your second year, what do you hope the attendees take away from these camps as they participate in them?

I would be lying to you if I didn’t say it was about responsible gaming. Yes, I want them to feel like they’re learning something, especially in the game they love, but I want to plant a responsible gaming seed in their mind and the minds of the parents about how important it is to get to know their kid’s passion. For the kids to know why it’s important to stand up every hour for five or ten minutes. To explain to them that this isn’t just something old people say, it’s actually going to make you better in the game and make you more focused. All these things about player performance and overall success in life—moving around and having your blood flowing is just as important as the practice they do in the game.

That’s personally my goal. Even for myself, I have to keep reminding myself to do that on a daily basis. I want them to start thinking about that at a young age.

Any final comments about the camps?

Other than that, just thank you to everyone and share the message. We had kids from all across the world last year. The key thing is we want them to have fun and feel like they’re not wasting their time.